How do I test the speed in Speedify?

Speedify allows you to test your individual and combined connection speeds from within the app itself. In this article, we are going to show you how to test your speeds and how to interpret any messages that may appear.

After connecting to one or more internet networks, tap the Test Speed button below the Speed Chart. A new pane will appear at the top of the screen. Here, you will see rows for each of your individual connectionand as your combined connection (if you are connected to more than one internet source). These rows display the respective upload and download speeds of each connection. For example, in the above example, we see that the Wi-Fi download speed was calculated to be 44.06 Mbps.

Speedify conducts the tests sequentially: it tests the download and upload speeds of each connection, before testing your combined speeds. The combined row show just how much faster Speedify is making your internet! Be aware that the Test Speed feature uses a lot of data, so you may want to run it sparingly if you have a limited data plan or if you are using a free Speedify Plan.

Why wasn’t my connection used?

Sometimes Speedify doesn’t use your connections when testing your speed. In these cases, the row will display cross-hatching and we will show messages in the Test Speed pane. 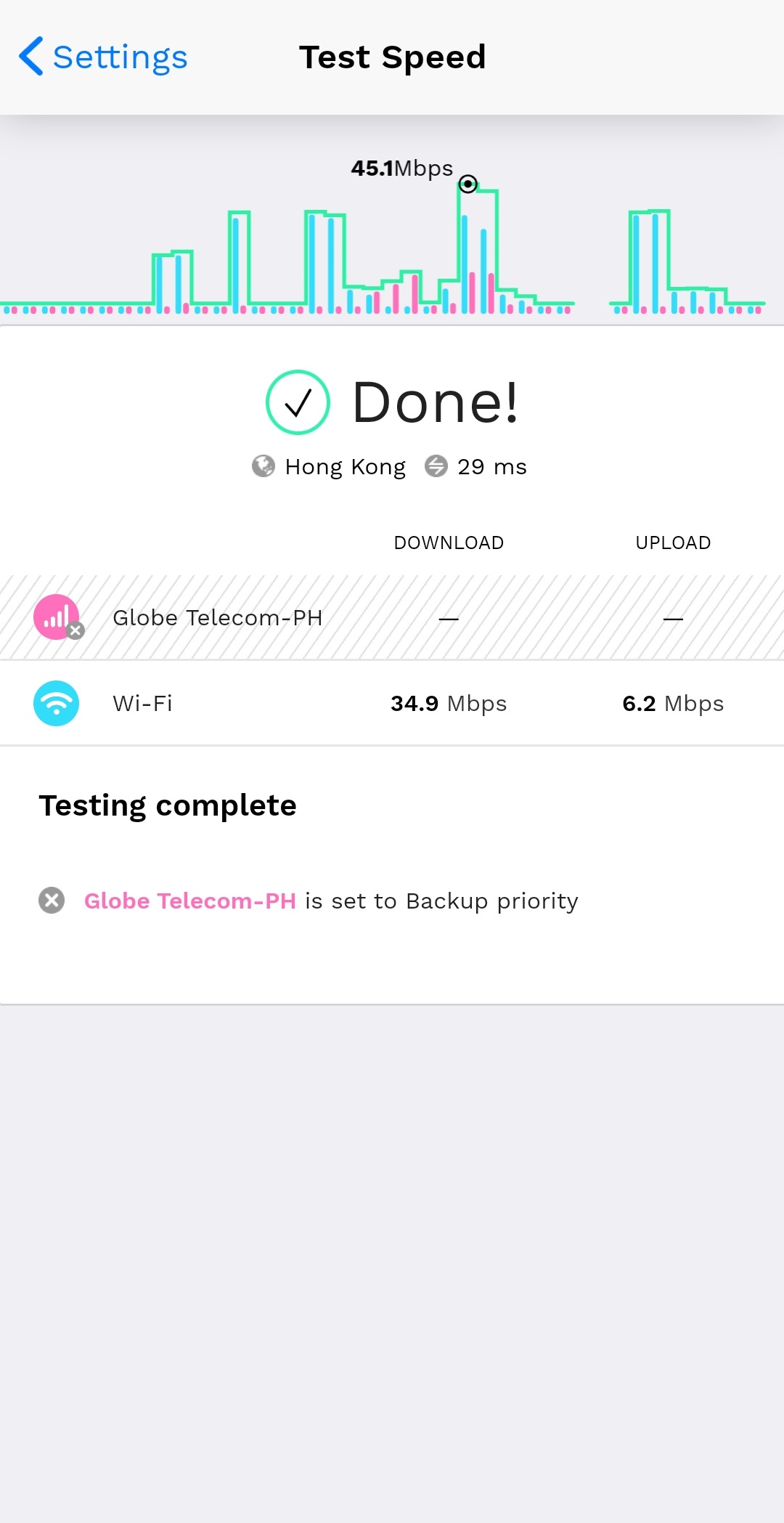 Below, we explain why this may happen.

[Connection name] is disabled.
A disabled connection will not be included in the test. You’ll have to enable the connection in Connection Settings if you would like to include it.

Most of the time, the tests will execute successfully, but there are certain conditions that may be inhibiting performance.

[Connection name] was too slow to increase combined performance.

With its intelligent bonding technology, Speedify detects when one of your connections is so weak (relative to your other connections) that it will detract from your overall speed. In these cases, Speedify will not include this connection in your combined test.

Speedify is in Redundant Mode. Switch to Speed Mode for faster speed.
The redundant mode is best used when you need maximum reliability, but it won’t provide the highest speeds. Click here to learn how to change Speedify modes.

Add more connections to enable bonding!
If you are connected to only one internet source, you will not see a “Combined” value in the Test Speed pane. This is because you need a minimum of 2 connections to bond. Learn how to add connections on PC or Mac in these articles.

You may not be connected to the fastest server.
Speedify is fastest when you are connected to a server located near you. If you have switched to a server that is far from you (for instance, if you are in the US and wish to use the torrent-friendly Amsterdam server), you may notice a speed decrease. Click here to learn how to change servers.

[Connection name] is Rate Limited to [#Mbps].
You have manually limited one of your connections to a lower rate. Speedify will still perform the test, but you may not see the connection’s maximum speed. You can learn how to change this setting here.

[Connection name] wasn't used during [Test Step] because [Always Connection Name] was fast enough.
Speedify is cost-aware. If it sees that your Always connections are sufficiently fast, it won’t include your Secondary connections. Speedify does this to conserve data usage for expensive connections when they won’t provide a significant speed boost.

Sometimes, things don’t work quite as expected when testing your speeds. When this happens, you will see messages appear in the Test Speed pane explaining the problem.

[Connection Name] failed during the test.
Your connection has failed in the middle of a test. It may still be used in the combined test if it becomes usable again.